A 9/11 Memorials Book for New Jersey 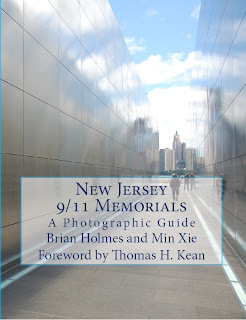 The foreword of New Jersey 9/11 Memorials – A Photographic Guide Including the National Memorials is written by former Governor of New Jersey and 9/11 Commission Chairman, Thomas H. Kean.

September 11, 2001 is a day that will long be remembered in the United States of America. Tributes to those who died in the terrorist attack that day have sprung up like May flowers across the U.S. Unfortunately, it is impossible for the typical busy person to go out and see them all.

New Jersey 9/11 Memorials – A Photographic Guide Including the National Memorials brings the memorials of that attack directly to you in a beautiful book filled with color photographs of dozens of the New Jersey monuments as well as the national monuments.

In New Jersey 9/11 Memorials, you’ll see memorials like these:


Included in the book is some background and location information concerning each monument, a chapter concerning the history of the attacks on and before that terrible day, and a list of the victims of the tragedy.
New Jersey 9/11 Memorials – A Photographic Guide Including the National Memorials is essential for the reader interested in participating in the tributes of his or her fellow citizens to the victims of the tragic attacks of September 11, 2001. A portion of the profits of this book go to unfinished or underfunded New Jersey 9/11 memorials.
Watch a trailer for the book below or on YouTube. It looks great if you change it to 720p HD and watch it in full screen. Craig Chaquico is the musician and the song is Sunset Altar.

PRINT EDITION
New Jersey 9/11 Memorials – A Photographic Guide Including the National Memorials is available for order as a 208-page 8.5" x 11" trade paperback with high-resolution, full-color photographs from Amazon.com, Barnes and Noble, and Createspace. The book can also be ordered in bookstores, and in bulk through Ingram Book Company, NACSCORP, Baker & Taylor, and Createspace Direct.

off the price elsewhere by safely buying the book from this website using PayPal. Just $21.00 + $4.00 shipping.
Bitcoin Accepted Too. e-mail
brian@brianmholmes.com for info
e-Book EDITIONS
The photo book is also available as an e-book downloadable for the Kindle from Amazon.com, the NOOK from Barnes and Noble, and for the Kobo e-reader at kobobooks.com as well as from Google Play and Google Books. Since it is a color photo book, the e-book is optimized for best viewing on the Kindle Fire, Nook HD, and Kobo Arc but will work on any of the black-and-white readers.

(You don't actually need a Kindle, Nook, or Kobo e-reader to buy an e-book, Amazon, Barnes & Noble, and Kobo will give you software that enables you to read any e-book on your PC, Mac, iPad, or smart phone. Adobe Digital Editions works as well and is also free.)